A few months ago I was on my way to an early-morning hike on a cloudy Saturday morning. The night before some fierce storms had passed through the area; I remember hearing the loud claps of thunder and feeling my house shake as I tried to sleep. As I drove slowly down this windy, mountain road, which was drenched from the prior night’s rainfall and littered with sticks and leaves and branches, I spotted a downed tree that was blocking the road. This was not a giant oak by any stretch, but it certainly made the road impassable.

I stopped the car and parked it in the middle of the road, about twenty yards before the tree, and pondered my next move. “I could turn around and head back home”, I thought to myself as I took another sip of cof 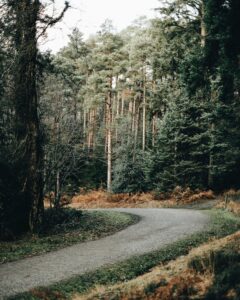 fee from my thermos. “I wonder if there is alternate route to the trailhead?”, I pondered. “Nah, I don’t think so”, I quickly remembered.

I stepped out of my car to survey the damage, and after a few minutes of examination, it became apparent that clearing these obstacles would take some time, but it certainly wasn’t impossible. “I’ve worked hard this week, and I deserve to take this hike”, I thought, as I anticipated the beautiful sights and sounds of nature that awaited me.

So I began the hard work of clearing this debris, which blocked me from reaching my destination. I started slowly and worked on the small stuff first, gathering the branches and sticks that prevented me from reaching the big stuff. It was challenging, methodical work, but eventually I worked my way into the bigger logs and branches, hauling them off to the side of the road, one by one, occasionally stopping to catch my breath and take a sip of water.

After about 45 minutes of this, there remained just one large obstacle, the main trunk of the tree that had fallen. Again I pondered whether the rewards would be worth the effort of moving this tree, and would I have any energy left to enjoy the hike? After another drink of water, I decided to continue, because after all, I had come this far and didn’t want to waste my effort. Much to my surprise, removing the remainder of this tree, while challenging, was not as difficult as I thought, and before long I had cleared a path that was big enough to drive through.

And off I went to enjoy the smell of the rhododendron forest and the sound of the water crashing against the rocks at the base of the majestic waterfall and the sight of red, orange, and yellow leaves gracing the branches of the poplars, oaks, and hickories. Granted, I stubbed my toes on numerous occasions, took a wrong turn here and there, and stumbled on the twisted laurel roots along the way. But it seemed a small price to pay.

We all have obstacles that block our paths – emotional debris, if you will – that come in the form of trauma, abuse, neglect, stress, grief, and problematic relationships, among other things. Going to therapy is the difficult, but necessary, process of clearing our emotional debris in a safe and steady environment so that we can, over time, move forward more confidently and with greater clarity and vision. Ignoring our emotional debris will only make our path more difficult in the long run, and it will rob us of the opportunities to experience the beauty and richness that lie on the other side.

A couple of months later, I encountered another road blockage on my way to a hike, but this one was smaller and more manageable, and took less time to clear. I know there will be more obstacles in the future, but I feel better equipped to handle them now, and I know the rewards are worth the effort.

PrevPreviousConfronting the Past: Why Talking Helps
NextHow Mindfulness Can Increase Your Emotional IntelligenceNext
Scroll to Top